This week I have been chairing sessions at an international workshop on the conservation of Hermann’s tortoise.  This was the species I studied over 30 years ago in southern France and it was hugely gratifying all this time later to see so much progress and expertise being devoted to the conservation biology of this threatened species across its entire northern Mediterranean range.

It is not often that post-graduate research projects lead to anything substantial.  In this case, however, I can draw a direct line from my initial research work to a number of major recent initiatives: notably the publication of the French national action plan for Hermann’s tortoise (2009 – 2014); the designation of  the ‘Réserve Naturelle Plaine des Maures’ (protecting over 5,000 hectares of lowland maquis of high biodiversity and conservation importance) ; and the current EU-funded LIFE project on Hermann’s tortoise in southern France. 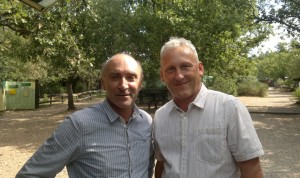 This did not just happen by chance.  In between times there was a huge persistent effort over the years by a number of determined conservationists and scientists to advocate stronger conservation measures for Hermann’s tortoise.   In particular, this was spear-headed by SOPTOM – the tortoise conservation body I established with Bernard Devaux in 1985 – and Marc Cheylan and his colleagues from the Ecole Pratique des Hautes Etudes at Montpellier.

I was particularly struck by the transformation of a once abandoned manor house (‘Le Chateau des Mayons’) where I had lodged during my first summer in France in 1981.  The old building has been restored and now sports the name ‘Maison de la nature’ and is the headquarters for the managers and wardens of the national nature reserve.

In another poignant moment during a brief visit to my old study site I found a male tortoise that I had originally marked as an adult back in 1982.  The animal was still in good condition and living in the same place as I had originally found him.  Impossible to age exactly but he must be at least 55 and probably over 60 years old – living evidence that rewards the persistence and tenacity of all those who have been working for the past 30 years to safeguard this symbolic species.