Momentum is a much-lauded attribute in sport. Well, one thing is for sure, the Green Sports Alliance certainly has plenty of it. Only four years old and it can already boast nearly 300 members from teams, professional leagues and venues, as well as an impressive array of corporate sponsors. 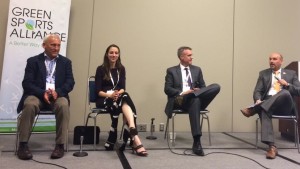 This year’s annual summit in Chicago was my first experience of the GSA in action. The event was well organised; it comprised lots of events – a mixture of conference and trade show – and had undeniable enthusiasm and energy driving the whole movement forward.

I was impressed by the range and number of examples of high-profile venues, teams and organisations embracing green initiatives. Predictably the emphasis was on classic green subjects – energy, waste, water resource management and green building standards. Nothing wrong in that, and there was much evidence of progress in these areas up and down the country.

I particularly liked a study reported by the US Golf Association where individual golfers had been geo-tagged to plot their movements during their rounds of golf. This gave a fascinating map of the areas of the golf course that people used – and more importantly showed clearly where people didn’t go, not even the bad golfers. Armed with this information the course superintendents could justify relaxing the management intensity in certain areas – often quite sizeable ones – and thereby reducing management costs and improving wildlife habitat. In my mind this would also make these places look better, a point on which the USGA Green Section is also gradually beginning to gain traction among the golfing public, thanks to environmental awareness raising programmes.

Over the border in Canada (Edmonton to be precise) there was a great example of inner city regeneration being accelerated by the development of the Rogers Place arena. This was one of a number of cases where the wider societal value of sport and sport development were being emphasised.

It was also good to hear about several initiatives to improve food services at sports venues, with much emphasis on local sourcing and increasing the proportion of meat-free options – said without a hint of irony in a city famous for its Chicago dogs.

I was there to participate in a panel discussion on sport and climate change. This was a topic that had not really surfaced elsewhere during the Summit, despite this year being so pivotal for global climate negotiations. In fact, there was still too much reference generally to carbon offsetting and the dreaded term, ‘carbon neutral’ without any sense that the US sport industry is even remotely aware of the cost benefits of measuring, managing and mitigating its carbon footprint.

My fellow panellists, Jeff Hansbro from Dow Chemical (an Olympic Worldwide Partner) and Eva Kassens-Noor a researcher from Michigan State University, and I mutually stressed the point that saving carbon equals saving money, and is better for people and the environment – a real triple win, that the sport sector is perfectly capable of achieving.

The GSA certainly gets it and with their undoubted marketing prowess and sheer determination to get the message across, I fully expect them to be driving the green-sport agenda for many years to come.

What I missed, however, was a sense of understanding sustainability in its broader sense. With the notable exception of an excellent keynote speech by Andrew Ference (Captain of the Edmonton Oilers Ice Hockey team and a student of sustainability at Harvard), there was very little mention of sustainable sourcing and supply chain management issues and certainly no evident appreciation of ethical sourcing aspects. It did feel and sound like a lot is being done on green technology and resource management, but in an ad hoc way and not in a strategic way based on sustainability management.

I hope sometime soon the US sport sector cottons on to the business benefits of sustainability and starts to appreciates the value of a sustainability management systems approach, coupled with effective policies on sustainable sourcing, reporting and assurance. It’s great doing techy stuff, but ultimately sustainability only works if it is fully integrated into an organisation’s policies and procedures, and becomes the way one does business. Maybe some ideas for next year’s summit?