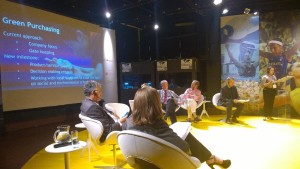 On the eve of the IOC Working Groups meeting in Lausanne to discuss a wide range of issues on the future direction of the Olympic Movement – the IOC’s ‘Agenda 2020’ – I was the other side of the Atlantic participating in a one-day conference, ‘Moving the Goal Posts: Aligning International Sport events with a comprehensive Sustainability agenda‘.

This was an initiative organised by the German Development Cooperation organisation (GIZ), using the occasion of the FIFA World Cup to bring together experts and stakeholders to examine some of the underlying issues currently calling into question the sustainability of large scale sporting events.  Unusually for such gatherings, the debate was fierce and impassioned: a small but animated group of local stakeholders rallied behind Professor Carlos Vainer from the Institute for Research and Urban and Regional Planning, Federal University of Rio de Janeiro, who made an eloquent denunciation of the vast public expenditure and lack of transparency (both from the government and FIFA) in the preparations for the 2014 FIFA World Cup.  Interestingly, despite all the opprobrium heaped on the organisation of the World Cup, there seemed to be recognition that it had served to bring together civil society in Brazil and helped people to find a common voice.

This chimes with recent examples of potential Olympic bidding cities pulling out of contention due to public no votes or lack of political support. Nor is this an anti-sport movement – far from it.  People still like the Beautiful Game and the Olympic ideals; they just feel the commercialisation, huge cost and autocratic way in which mega-events are being organised have taken things away from their original purpose.

As is usually the case with the big sporting events, once the action gets underway the protests fade out of the limelight and the organisation surpasses expectations – the Sochi Winter Olympics was a case in point – but it would be wrong to assume all is fine after all.  The rumblings about sporting mega-events are finding common voice around the world and the sport governing bodies need to take heed. The IOC discussions are very timely.